Black History Month may be wrapping up, but there’s no better time to embrace a few of our favorite black-owned fashion labels than right now.

You may have already caught major brands such as Nike and Adidas releasing collections that pay homage to the African diaspora. In the past, streetwear brands such as Union LA, Alife, and Awake NY have all dropped capsule collections in honor of Black History Month.

But for some brands, celebrating their heritage is a year-round effort. Here, we’ve selected out the top 10 black-owned brands that everybody needs to know from apparel to travel accessories.

From popular fashion labels Daily Paper, Pyer Moss, and Telfar, to accessories brands such as L’ENCHANTEUR, Third Crown, and ASHYA, there’s a new design for every wardrobe to cop before Black History Month’s over (and beyond).

View the full rundown of the brands in the profiles below.

Based in Amsterdam, Daily Paper was co-founded in 2010 by Jefferson Osei, Abderrahmane Trabsini, and Hussein Suleiman, of Ghanaian, Moroccan, and Somali descent, respectively.

But Daily Paper is more than a fashion brand. “It’s a movement of ingenious creatives from all walks of life, brought together by shared passions,” says co-founder Hussein Suleiman. “We’re creating a community of belonging rather than exclusion.”

Starting out as a menswear only label, Daily Paper is living up to this sentiment with the launch of its women’s line in 2017, further expanding its offering. 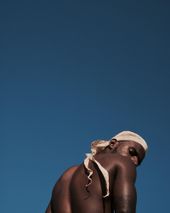 The brainchild of twin sisters Dynasty and Soull Ogun, L’ENCHANTEUR takes on an affordable essential you’ll find in any black household — the durag. After spending years perfecting their crafts in the textile and jewelry fields, the Ogun sisters launched the brand in 2012, debuting with a line of high-end durags made from silk, velvet, and denim.

While beauty supply durags usually retail for no more than five bucks, L’ENCHANTEUR’s fancy ’rags come with price tags of up to $130, turning the affordable accessory into a flex-worthy piece. But the Brooklyn-based brand’s offerings don’t stop there. With a shared interest in astrology, mythology, architecture, and magic, L’ENCHANTEUR’s collections also include apparel, hats, jewelry, art, and more.

Every piece is created with the goal to leave a mark on society, while also documenting the times we live in. In recent years, the brand has received nods from artists such as Erykah Badu, Lauryn Hill, and J. Cole.

Founded in 2017 by Ashley Cimone and Monya Annece, ASHYA is a Brooklyn brand focusing on high-quality leather accessories such as belt bags, pouches, and other travel-ready accessories. After traveling to India and noticing a shortage of sophisticated and contemporary accessories, Cimone and Annece saw a unique opportunity to realize their design passions.

“The accessories market is quite saturated with traditional bag styles, and even the resurgence of belt bags sees the same shapes over and over again,” share the founders about the brand’s beginnings. That’s what motivated ASHYA’s founders to offer a newer approach to the accessory, opting instead for designs that are both stylish and functional, inspired by the modern traveler.

The brand’s designers have clearly been doing it right, with ASHYA having recently been picked up to take part in the CFDA Elaine Gold Launch Pad residency program for emerging designers.

Based in New York, Third Crown was created by husband-and-wife design duo Kristin and Kofi Essel. Kristin studied apparel design and worked in jewelry, while Kofi graduated in men’s design from FIT. After their respective experiences in fashion, the couple decided to become business partners as well, creating a line of unisex jewelry.

Using 18K gold, silver, and gunmetal, Third Crown’s latest collection includes jewelry that is simple yet full of attitude, featuring clean lines and elegant designs. “Masculinity and femininity are fused for us,” says Kofi Essel. “Anyone can find something they love, regardless of their gender. If it fits, rock that joint.”

Though Third Crown is still in its prime, the brand has already caught the attention of celebrities including Beyoncé and Solange Knowles and has made appearances in Issa Rae‘s hit show Insecure.

Telfar Clemons, as his name may suggest, is the man behind Telfar. Clemons was born in the United States to Liberian parents and moved to New York City in 2002 to pursue a modeling career. The year later, Clemons began creating deconstructed pieces from vintage clothes, sold in Soho and Lower East Side boutiques.

That proved to be successful, so in 2005, Clemons officially launched Telfar — his own brand of unisex fashion. Though Telfar is widely known for its chic sportswear and everyday staples, one particular offering stood out in recent years — the shopping bag. Dubbed the “Bushwick Birkin,” Telfar’s shopping bag quickly became a coveted accessory in NYC and beyond.

Telfar’s popular tote is made from vegan leather and comes with the brand’s “TC” logo embossed on the front, and its strap can easily turn it into a shoulder bag. The accessory is available in three sizes (small, medium, and big) as well as different colors such as white, black, tan, olive, or red. Best of all, the “Bushwick Birkin” is pretty affordable, too, with prices starting at $150.

You’ve probably already heard of Pyer Moss. The menswear and womenswear brand holds weight in the fashion world and counts ongoing collaborations with Reebok. Kerby Jean-Raymond, the brand’s designer, has also been appointed as creative director of Reebok Studies__, a new sub-division.

But Pyer Moss is more than just that. The Haitian-American designer never fails at delivering powerful messages through his work. He’s not afraid of calling people out, either, as he recently critiqued BoF in an open letter. For example, in September 2019, Pyer Moss’ NYFW show was inspired by Sister Rosetta Tharpe, a queer black woman credited for having invented rock’n’roll. At the MET Gala, meanwhile, Raymond wore a custom-made suit paying homage to the legacy of black drag queens.

“I’m figuring out a lot of shit, “I’m figuring out how to navigate the world as a poor black man, and now as a rich black man. As I’m figuring it out, I’m putting it in my work and being transparent about it because I hope that somebody who feels like me — not just looks like me— back then, can also feel like me now.”

Recho Omondi, the Kenyan-American woman behind OMONDI, was born and raised in the Midwest, then later moved to Georgia to study fashion design at the Savannah College of Art and Design. Some years later, she moved to NYC to work on her own fashion label.

If you think you’ve seen the above sweater before, you may be right. OMONDI’s “Niggas” sweatshirt made the rounds in recent years, and was worn by Issa Rae’s during an Insecure episode. Unlike most designers, though, Omondi doesn’t show during New York Fashion Week, and she only drops one collection per year (which may explain why most of her pieces are currently sold out).

OMONDI is more than just a fashion label. The designer also launched The Cutting Room Floor, a podcast show focusing on the fashion industry and its challenges. So far, OMONDI’s podcast has had guests such as Heron Preston, Diet Prada, Matthew Henson, and many more.

Slashed by Tia is the brainchild of Teni Adeola, a Nigerian-born fashion designer currently residing in New York City. Adeola started working on her brand in 2017, while pursuing an arts degree in culture and media from The New School. Her designs draw inspiration from her arts background, as it’s evident from Slashed by Tia’s Victorian-inspired garments.

Just picture what women from the Renaissance Era would wear if the crop tops were a thing. The result is dreamy yet sensual fits like matching see-through pants and crop tops, complete with ruffles, of course. Adeola’s designs became popular on Instagram, and soon caught the attention of celebrities, too.

Big names such as SZA, Dua Lipa, and Gigi Hadid have shown love to Slashed by Tia, and the success doesn’t seem to stop. In January 2020, Tia Adeola made her official debut at New York Fashion Week, which was welcomed by exciting reviews.

If the African diaspora had an official merch line, MIZIZI would be it. The brand’s name translates to “roots” in Swahili and was founded in 2015 by Paakow Essandoh. While attending the University of South Florida, Essandoh noticed a lack of representation among African diaspora students and decided to literally put their countries on a jersey.

Essandoh dropped MIZIZI’s first jerseys in the summer of 2015, and the designs proved successful. So far, MIZIZI’s jersey rep African countries such as Nigeria, Ghana, Ethiopia, Eritrea, Rwanda, Uganda, Zimbabwe, and more. The African diaspora doesn’t stop at the continent, of course. And so, the brand’s designs also include countries such as Jamaica, Trinidad and Tobago, and others.

The jerseys are available in basketball, soccer, and baseball styles. Recently, MIZIZI has also collaborated with Marvel for a “Wakanda” Black Panther collab, as well as Disney for a Lion King capsule to coincide with the movie release. They even had a “Blue for Sudan” edition in support of the country 2019’s uprising. Essandoh’s formula is clearly working, though we kind of wish MIZIZI would expand onto a full clothing line, too.