If you don’t know what to say, improvise. Now, let’s apply that to killing people, shall we? No? Well, suit yourself, I’m going to do it anyway.

The EOKA (which stands for Ethniki Oranosis Kyprion Agoniston—National Organisation of Cypriot Fighters) was a Greek Cypriot nationalist paramilitary group that fought against British forces that occupied the island in the 1950s. As with many insurgencies and guerrilla forces, the EOKA had to make do with what they could beg, borrow, and steal in terms of weaponry. There was one more option though. They could make some.

This ‘pistol’, confiscated during the conflict and now housed in the Royal Armouries in London, uses a spent 20mm artillery shell as a barrel and a crudely carved piece of wood as a handle. A hole in the casing provides a means to manually light the powder in order to fire a shot, suggesting that this was a single-use weapon (also, an artillery shell is unlikely to survive a shot being fired through it). This design suggests two very worrying facts about the EOKA pistol:

1) Given that it has no true barrel, accuracy at any range short of point-blank would be zero (maybe that was the point).
2) The shoddy design was just as likely to result in the user getting their hand blown off. Either way, a brutal improvised weapon. 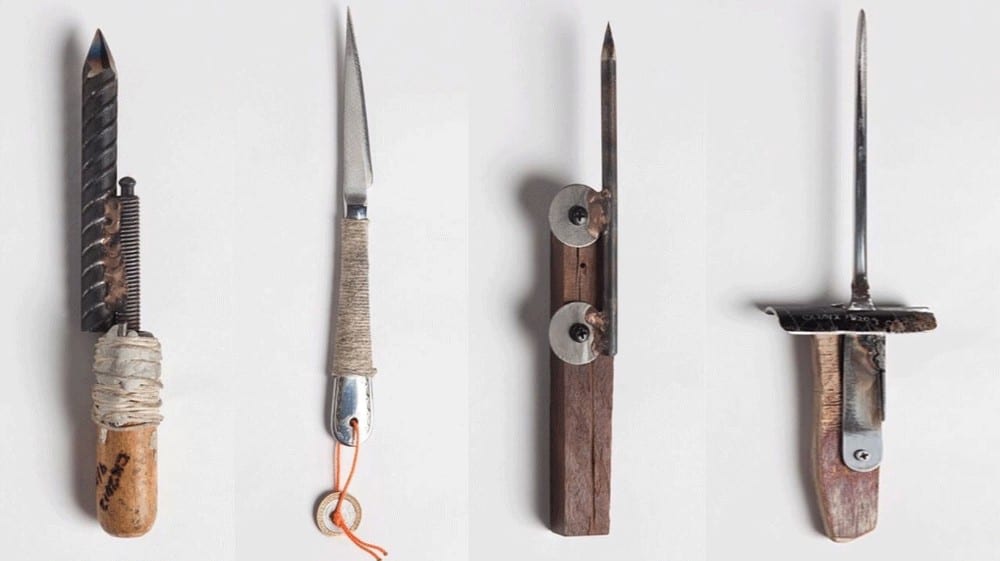 Prison! The place bad people go to get some time out before returning to society all rehabilitated and ready to start contributing to society… unless you get stabbed in the kidney by a sharpened piece of glass with some dishcloths wrapped around the end to form a handle. From sharpened toothbrushes to pieces of prison fencing, bars of soap to plastic forks, prisoners can make a knife out of almost anything.

The scariest thing about the use of glass as a weapon is how brittle material it is. Ok, hear me out. The brittle nature of the material allows for the knife to be broken easily after it has been plunged into the body of an enemy as well as allowing for the edge of the blade to be as sharp as a surgeon’s scalpel. Yeesh.

Did you ever get a potato gun as a kid? Maybe you had a BB gun if you had cool/negligent parents? Well, in parts of Southeast Asia, you can just bodge up a marble gun yourself. Sounds fun doesn’t it? A little pop gun that fires those cool, age-old kids playthings; marbles. Yay! Yeah, these guns are actually pretty brutal.

This sort of marble/ball bearing-firing zip guns use gas pressure from ignited denatured alcohol. They’re cheap and easy to make and useful for people who live in mountainous or jungle terrain; when they need food, they need to hunt. There are often no shops close by, neither supermarkets nor gun stores, and even if there were a whole bunch of Walmarts dotted around the Mekong Delta or the mountains of Laos, there isn’t a lot of cash floating around, rendering the purchase of guns a luxury that’s out of reach to your average resident in such areas.

The danger with these sorts of guns, amongst other obvious reasons like a lack of training and education, is that judging how powerful they are is tough, given that they are homemade. They are often viewed as nothing more than a simple, weak air rifle, fine for plinking cans or shooting small birds and rodents, but unlikely to kill a person. In reality, tragic accidents and violent crimes are far too common with these untraceable, poorly-made firearms.

There is a long history of farming tools being used as improvised weapons. A whole school of martial arts that use farming tools from Okinawa called Kobud? was developed in order to circumvent the general ban imposed on Okinawan peasants by the Satsuma Samurai class. In medieval Central and Eastern Europe, the humble agricultural scythe was removed from its shaft, turned to point upwards and attached to a longer, pike-style pole, thus creating one of the most devastating pole arms ever made.

The war scythe outlasted many similar pole arms, seeing action as late as the Silesian Uprising of 1921. Beyond the visceral horror of encountering a line of blokes brandishing the same weapon used by the Grim Reaper, ready to slice heads from necks en masse, is the Scythe’s use as a symbol of the Kosynierzy (Scythe-bearers in Polish), which was used to exemplify the martial honour of the forces fighting for Polish independence. The scythe was even used as a symbol on the honour badge of the No.303 Squadron of the RAF during the Second World War. They were a unit of Polish pilots that fought during the Battle of Britain, showing that this once humble implement for mowing grass was still a symbol of Polish freedom well into the 20th century.

Here’s another way that the illegal hunting of endangered big game can blow up in your face; make your own gun. Much like the EOKA pistol, these examples of confiscated hunting rifles in Zimbabwe don’t exactly match up to the craftsmanship of Holland&Holland, Beretta or VO Vapen. The main difference is that these poachers’ guns are ‘designed’ to put big holes in big animals which, if some catastrophic misfire occurs, will blow a big chunk out of the user instead.

The examples shown in the Forgotten Weapons YouTube video were confiscated from poachers by the Zimbabwean Police. It isn’t only the gun that is improvised, but often the powder used to propel the shot as well. They tend to use ground up match heads, stolen safety fuses from mining sites, anything except the usual type of black powder, thus upping the danger factor to 11! Host of the channel and gun expert Ian McCollum put it best when referring to one example that had blown up: “that gun is thoroughly unusable”. Take note, African poachers!

The term IED—’improvised explosive device’—conjures images of war torn Iraq, Afghanistan or domestic terrorists like Timothy McVeigh or Anders Breivik. When we think of an assassin, we consider poison, sniper rifles or silenced pistols in the back of the target’s head. Serial killer? That’d be knives, axes, ropes to bind, underwear to strangle with. Donald ‘Pee Wee’ Gaskins was a serial killer who, whilst incarcerated in 1982, was contracted to kill a fellow inmate. He used an IED.

Rudolph Tyner was on death row. He had killed an elderly couple, Bill and Myrtie Moon, in an armed robbery gone wrong. Tyner shot the Moons in their South Carolina store when Bill refused to hand over the money in the cash register to him. Tony Cimo, Myrtie’s son from a previous marriage, waited a year to see Tyner sit in the electric chair. The day never came due to Tyner’s death sentence getting commuted to life in prison. Wanting vengeance for his parents’ murder, Cimo turned to the notorious killer ‘Pee Wee’ Gaskins. The diminutive serial slayer befriended Tyner, slipping him a radio and claiming it could be used to communicated with Pee Wee from their respective cells. The pair arranged a time to test the device and, when Tyner put the speaker cup to his ear, Gaskins detonated the C4 plastic explosives that he had placed inside the device, blowing Tyner’s head off. “The last thing he heard was me laughing” Gaskins later quipped.

Ready for a hot take? The First World War was a brutal affair. If we move beyond the unprecedented death count (until the next world war came along), the huge leap in weapon technology and the creep of the battlefield to the home front, we can conversely note a technological regression amongst the rank and file soldiers manning the trenches. Clubs, spades, hunting knives and bayonets were often preferred to the fancy guns provided by the army when soldiers were tasked with conducting a trench raid.

Although the sharpened entrenching tool seemed to be the mêlée weapon of choice for most belligerents on the front, the visceral brutality of the ‘French Nail’ is enough to turn Rambo into a pacifist. The method of procuring one of these daggers was simple; grab a bit of scrap metal, a railing, a fence stake, send it to the company blacksmith for a spot of sharpening and twisting and, voila! You can now stab a Kraut, Tommie, Frog or Yank, whoever you’ve been tasked with killing.

3. Catapults and Trebuchets in the Syrian Civil War 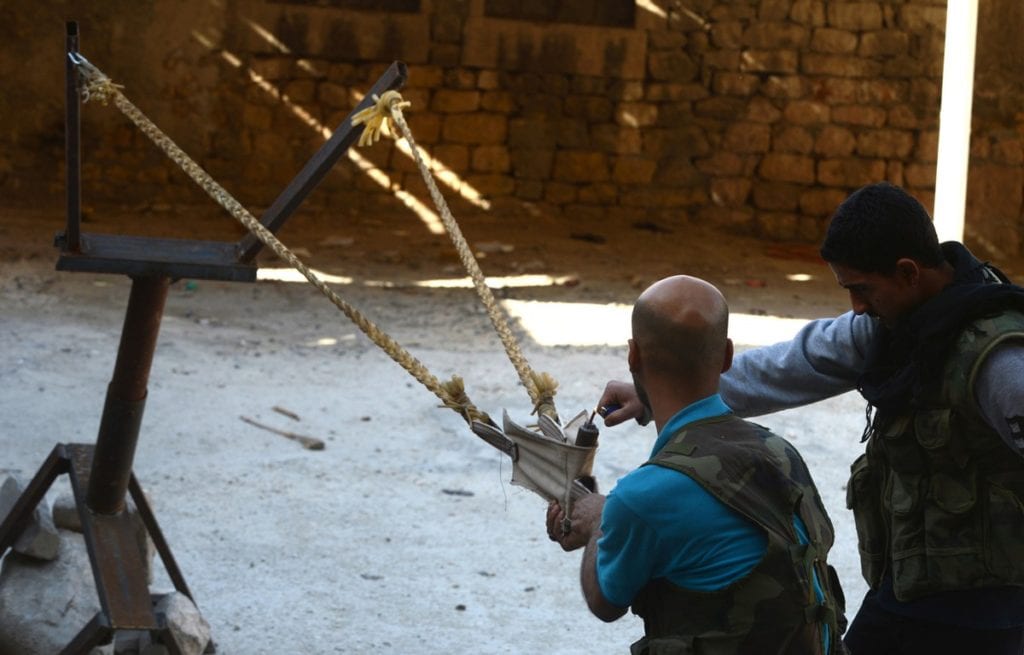 Perhaps we can understand why the soldiers of the Great War reverted to the tactics and weaponry of a previous age; they were engaged in the first war of the modern era. The civil war in Syria, however, is well into the modern era. I mean, it’s still going on, isn’t it? (Thanks Covid, BLM and Hong Kong, I know of nothing else now). The rebel faction fighting against Assad and his government forces have really upped their game with regard to improvising weapons. There’s no sending a fence post to the blacksmith here, oh no. They’re making machines reminiscent of medieval sieges and Roman battlefields.

The fighting in Syria, like any such conflict, is brutal, unforgiving and messy. For all the criticism that gets (often rightly) thrown at Western powers for their use of ‘surgical’ drone strikes, usually due to the tacit acceptance of ‘collateral damage’ (death of innocents), one cannot help but wonder how a trebuchet flinging a flaming metal garbage can full of C4 is any better. It isn’t. War is Hell.

If you thought the war scythe was the most deadly weapon improvised using farming equipment, you’re wrong. From the infancy of the previous centrury, the Irish Republican Army was engaged in a brutal guerrilla war against the British state and, much like the Viet Kong’s use of bamboo spikes, whipping vines and poisonous snakes as improvised weapons in the jungle war with the US, the IRA decided to make use of their surroundings—the sprawling farmlands of Ulster.

In 1992, the IRA attacked a British Military watchtower in Crossmaglen, County Armagh. Did they use they’re stolen guns, or their illegally shipped arms from Libya, their Armalite rifles and Soviet-era RPGs? Nope. This time they took their inspiration from their surroundings—they modified an agricultural manure spreader, towed by a tractor, but instead of flinging faeces on a field, the IRA flung arcs of burning fuel at the Brits. The four soldiers manning the tower narrowly escaped the nine-meter high fireball that consumed the structure, fleeing to a nearby armoured vehicle. In an odd reversal, perhaps indirect inspiration, farmers in the US now employ a similar device to get rid of weeds. Full circle.

1. Whatever the hell THIS is 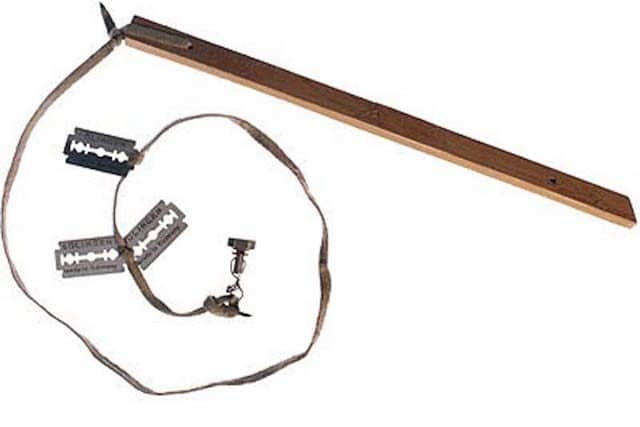 What’s worse than finding yourself in a notoriously violent German prison? Being whipped by a loose bundle of razor blades in a notoriously violent German prison, that’s what. A couple of entries in this list have pointed to the (often violent and tragically misplaced) ingenuity shown by prisoners when they invent ways to do what they want in a highly restricted environment. This entry is proof of the opposite—violent prisoners are often stupid as hell.

It seems likely that, very much like any flail-like weapon in the hands of anyone except a trained medieval Knight, this weapon is just as likely to cause serious harm to the user as it would the enemy. It’d take a long, deep hit on your toothpaste- tube-crack-pipe to numb the pain caused by your prison-made razor whip…what a weird sentence.